eyond all the horrific news on climate change, there is a beacon of hope. On Monday, 9 August 2021, the Nobel Peace Prize winning United Nations Inter-Governments Panel on Climate Change (IPCC) issued its first new report in eight years. Two hundred fifty of the top climate scientists in the world confirm stark realities everyone should know by now.

Climate change is a clear and present threat to human survival. Fossil fuels are responsible and it will require deep, rapid cuts in greenhouse-gas emissions to approach staying below 1.5°C of warming. The new goal is to get as close to limiting fossil fuels as humanly possible. The timeframe for intervention has shortened. The new timelines are one to two decades less than previously calculated.

The findings in the UN’s IPCC report were difficult to hear – especially as we witness the largest ever fire in California’s history and rampant fires in Turkey and Greece. One of the fourteen Summary Headlines states:

Many changes in the climate system become larger in direct relation to increasing global warming. They include increases in the frequency and intensity of hot extremes, marine heatwaves, and heavy precipitation, agricultural and ecological droughts in some regions, and proportion of intense tropical cyclones, as well as reductions in Arctic sea ice, snow cover and permafrost.

Without immediate, massive investment in interventions, the human race will face extinction.

The IPCC report follows the damning 13 January report contributed to by 17 leading scientists from around the globe entitled: Underestimating the Challenges of a Ghastly Future which chronicles the current impacts to date in fourteen key biodiversity sectors.

We report three major and confronting environmental issues that have received little attention and require urgent action. First, we review the evidence that future environmental conditions will be far more dangerous than currently believed. The scale of the threats to the biosphere and all its lifeforms—including humanity—is in fact so great that it is difficult to grasp for even well-informed experts. Second, we ask what political or economic system, or leadership, is prepared to handle the predicted disasters, or even capable of such action. Third, this dire situation places an extraordinary responsibility on scientists to speak out candidly and accurately when engaging with government, business, and the public. We especially draw attention to the lack of appreciation of the enormous challenges to creating a sustainable future. The added stresses to human health, wealth, and well-being will perversely diminish our political capacity to mitigate the erosion of ecosystem services on which society depends. The science underlying these issues is strong, but awareness is weak. Without fully appreciating and broadcasting the scale of the problems and the enormity of the solutions required, society will fail to achieve even modest sustainability goals.

The article provides this graph of the damage already done: 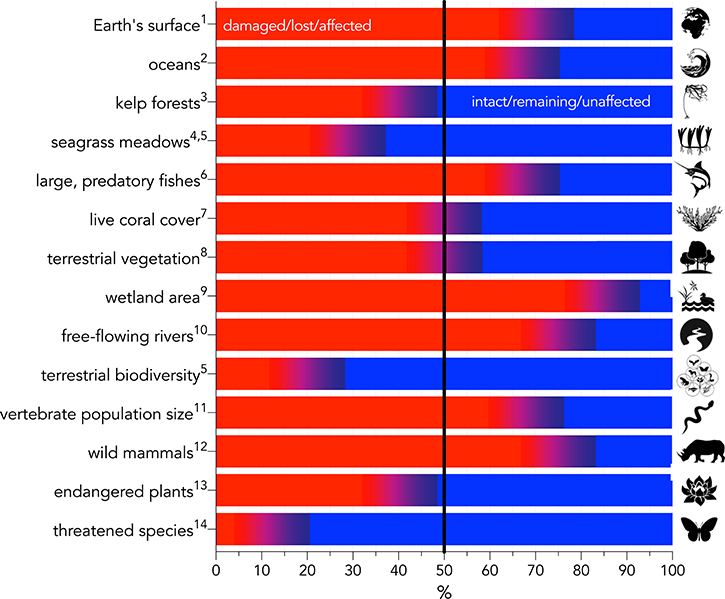 Then the article goes on to discuss:

Yet, our goal is not to present a fatalist perspective, because there are many examples of successful interventions to prevent extinctions, restore ecosystems, and encourage more sustainable economic activity at both local and regional scales…

It is therefore incumbent on experts in any discipline that deals with the future of the biosphere and human well-being to eschew reticence, avoid sugar-coating the overwhelming challenges ahead and “tell it like it is.” Anything else is misleading at best, or negligent and potentially lethal for the human enterprise at worst.

MEANWHILE, the esteemed economist and financial analyst, John M. Mason, reported that bank lending in the U.S. is down 25% from May 2020 (approx. $1.625 trillion) to the end of July 2021 (approx. $1.225 trillion). Despite having record-setting deposits, doubling from 8% of total assets to 16% of total assets according to the data released by the H.8 Federal Reserve System.

Here is a solution to the problem, the promised beacon of hope.

The capital to fund initiatives to combat climate change and a host of social imperatives exist in abundance!

The challenge is to stop thinking that governments alone are equipped to deal with the exigencies and magnitude of the situation. Globally we need to re-conceptualize and revolutionize how we finance our future. We can fund $10 trillion USD while keeping our money. All accomplished without $1 in new taxes, $ zero new national debt, and $ zero government spending.

Public and private sectors, as well as individuals, need to take a more active role in planning and contributing to our community and global survival. Collectively, and individually we can work alongside government agencies to accomplish what is necessary. Let us remember the stirring call to service of President John F. Kennedy’s inaugural address, “Ask not what your country can do for you, but what you can do for your country.”

CCFOGlobal presents deploying net wealth into the economy while the wealthy retain ownership of their funds. This cycle generates renewable and sustainable funding!

It is time to #FundTheFutureNow using fully secured bank loans. This will lead to basically limitless capital available for climate survival projects. The immediate impact will be increased liquidity and accelerated circulation of capital.

With this method we can fund:

Just maybe this beacon of hope will help create a survivable future.

We're not around right now. But you can send us an email and we'll get back to you, asap.